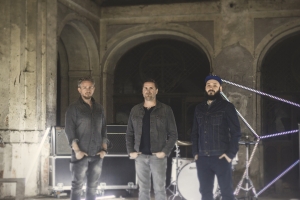 Maciek Wasio has formed a band called Ocean. It was working under this moniker for several years, up until 2013, when the name has been shortened to OCN. Shortly after being established, still in 2001, the band released its first EP called "3", and year later two subsequent releases surfaced – another EP "6" and first full-length album "12". From the very beginning Ocean's rock music with intelligent lyrics in Polish, and catchy melodies received accolades from both, fans and reviewers. Fan base was growing bigger and bigger as a result of numerous fantastic live shows.

The turing point in Ocean's career has happened in summer of 2012. Ocean has won first edition of "Sziget Poland Talent Contest", and as a result the band played on Sziget Festival on August 7th 2012. In Hungary Maciej Wasio, Piotr "Quentin" Wojtanowski (bass) and Bolek Wilczek (drums) premiered some brand new material sung in English and also some older stuff with English lyrics. Shortly after this unique performance the band hit Rolling Tapes Studio and recorded new single "Waterfall". The song debuted on no. 4 on the biggest rock chart in Poland, and quickly climbed to the top. As it turned out "Waterfall" has become one of the biggest Polish hits, according to Polish music summary of 2012.

The year 2013 couldn't start better for OCN. The band has joined big family of artists of Warner Music Group. The international contract includes recording the English-language album "Waterfall" as well as management and booking. As for the album, Grammy Award winner Vance Powell, who previously worked with artists like The White Stripes, The Raconteurs, Kings Of Leon, and The Dead Weather, handles production duties. In January 2013 Vance has come to Poland to supervise recording process personally. In the wake of these recent events the band decided to abbreviate its name to OCN.