Poznań not only for CEDE 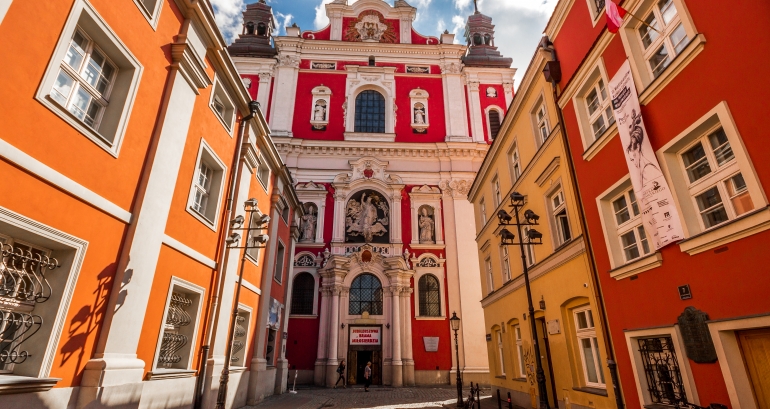 However, a trip to the capital city of the Wielkopolska region can also become a pretext to visit one of Poland’s most interesting cities, inextricably linked to the very beginnings of Polish statehood. It was here that Duke Mieszko the First had chosen for his borough; it was also probably where he he was baptised in 966, thereby joining the ranks of medieval European rulers. This very event is thought to have been the beginning of Polish statehood. This story, as well as many more, are told at Porta Posnania - the state of the art multimedia heritage interpretation center, located in the Śródka district of Poznań. Ages ago it was a separate little town and Śródka has managed to preserve some of this small town charm and atmosphere to this very day. Nowadays, it has undergone a major gentrification and is home to many little restaurants and bars. One of the district’s most noticeable attractions is the fairytale, 3-dimensional mural on the wall of one of its townhouses.

When visiting Poznań, it would be impossible to miss Stary Rynek (the Old Market Square) with its magnificent Renaissance Ratusz (Town Hall). On its tower, every day exactly at midday, Poznań’s famous billy goats butt their heads a dozen times. The Old Market Square also hosts Poznań Croissant Museum in one of its townhouses directly opposite the Town Hall. You will not find any museum cabinets filled with exhibits - there are however live audience participation show-and-tells, where you can both taste and learn the secrets of the St Martin’s Croissants, one of Poznań’s most famous delicacies.

The Old Town is the beating heart of this city of half a million, with around 120 thousand students residing within its limits, including those from Europe and other continents. They are one of the reasons Poznań is alive and kicking almost day and night. Numerous bars, clubs and restaurants await the visitors at any time of the year.

The past and present interlock in Zamek Cultural Center, which is the former Imperial Castle. Castles are usually famous for their history dating back to the days of yore - but Poznań castle is unique. It is Europe’s youngest castle built for a crowned ruler. It was built in 1910 for the German Emperor William the Second, and its history is just as complex as the entire 20th century. Today, it houses one of Poland’s biggest cultural institutions, organizing hundreds of concerts, festivals, exhibitions and other events every year.

Another place where various worlds meet and mesh is Stary Browar - a shopping, arts and business center which is an adapted former 19th century brewery, hence its name. In 2006 it was awarded the title of Best Shopping Center in the World in the medium-sized commercial buildings category by the International Council of Shopping Centers.

The modern continuator of Poznań’s beer traditions, dating back to the medieval times, is Lech Browary Wielkopolski. Lech is one of Poland’s most beloved and popular beer brands. The Lech Brewery is also available for guided tours, which show the visitors all the stages of beer production and conclude with a beer tasting.

The center of Poznań is compact enough for on foot or cycle sightseeing - in fact, it offers nearly 90 city bike stations to choose from. This way you can visit Lake Malta, one of Europe’s best and most picturesque professional regatta courses. For Poznań residents it is one of the most beloved places of active leisure, with an all-year-round ski slope and an impressive Aqua Park - Termy Maltańskie, with a few dozen saunas and many other water attractions.

These are only a selected few of the many attractions Poznań has to offer, and we haven’t even touched upon Poznań’s surrounding areas with the Castle in Kórnik, the meticulously renovated Palace in Rogalin, showing the everyday lives of the 1930s aristocracy, or Wielkopolski National Park with its unique postglacial landscapes.

More information and ideas on Poznań’s attractions available at www.poznan.travel/en

CEDE in Poznań – the quintessence of an exhibition and learning combined

Speakers' corners open to all