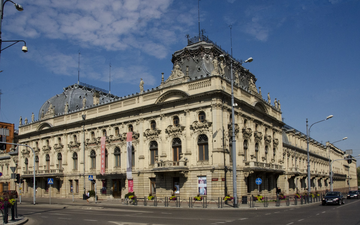 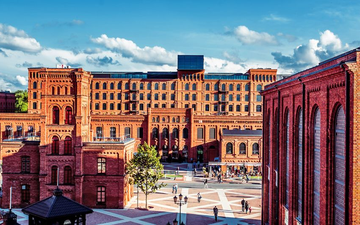 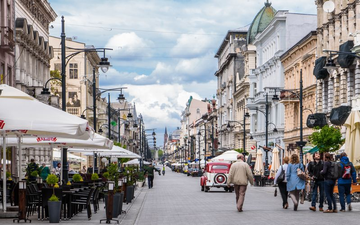 Łódź is a creative city, a city of festivals, a city which is being discovered all over again. It is located in the centre of Poland, just 120 km away from Warsaw - the capital, at the crossing of two main highways. The location at the crossing point of two main communication routes in Poland makes it a very important spot on the logistic map of Poland – you could say that all the roads lead to… Łódź.

Łódź is a city of contrasts which intrigues almost at every step. It is full of factories and, at the same time, it is very green; eclectic but also avant-garde. Łódź dazzles with the lavishness of factory owners’ palaces and astonishes with artistic installations.

Despite its dynamic growth and constant changes, Łódź does not forget its roots in the 19th century textile industry. Old factories located in the city centre are not being demolished, but converted into service centres and tourist attractions. Historical pre-war tenement houses are being restored in order to preserve the original 19th century city layout.

Come, stay over, get to know it and get a taste of it! See You in Łódź!

More information about Łódź you can find at:

One of the most renowned streets in the country and also the longest Polish promenade forms a symbol of the city. It is a pedestrian zone surrounded by tenement houses and palaces from XIX century that house local shops, restaurants, cafés, restaurant yards, pubs, and music clubs. Piotrkowska pulsates with life all year round.

One of the biggest Polish shopping and entertainment centre filled with restaurants, shops and cultural institutions. Back in XIX century it was a huge textile factory complex with its own fire station and power plant. After restoration in 2006 this extremely successful combination of history and modernity has been granted awards on numerous occasions.

Constructed in 1906 former power station converted into a modern Centre for Science and Technology. Apart from exhibitions such as “how the electric energy is made” the Centre also houses one of the most advanced planetariums in Central Europe. EC1 is an open space for artists of various fields, adapted for individual creative work, workshops, and group events. It is a home to the National Center for Film Culture, Łódź Film Commission, and Center for Comics and Interactive Narrative.

Former factory-residential complex from 19th century. Back in the days it was a self-sufficient city inside a city. It included factory buildings, together with a huge castle-like cotton mill, warehouses, workers’ houses, school, fire station etc. Nowadays, it forms more intimate district in which you can find local cafes and bars.

It is located in so called “White Factory” and has the largest collections of artistic fabrics and weaves as well as outfits used in the 19th and 20th century. In the back part of the museum, there is an Open-Air Museum of Lodz Wooden Architecture with the typical 19th century houses.

Former factory now turned into local restaurants, design and creative industry complex. It is located at the very central part of the city next to main street – Piotrkowska.

The museum is located in the magnificent mansion from 19th century. Apart from the exhibition of its interiors from the turn of the 19th and 20th century and the exhibition chronicling the history of the industrial Lodz, a number of rooms have been dedicated to artists related to the city and those who were meritorious to the city’s inhabitants.

The museum helps visitors get familiar with old film equipment and objects related to the film industry. It is located in the 19th century palace, next to the famous Lodz Film School campus.

The collection displayed at the Museum of Art is primarily focused on the art of the 20th century. It is an exceptional collection as it was created by the artists themselves when they donated their works to the museum.

The walls of over 170 buildings in the centre of Lodz are covered with huge paintings – so called murals. They makes Łódź the largest urban street art gallery in Poland. The city is also filled with street art installations. The most impressive ones are: “Birth of the Day” at Więckowskiego 4 and “Rose Passage” at Piotrkowska 3 where all the walls of a backyard have been covered with the countless pieces of broken mirrors that form hundreds of rose-shaped patterns. At Piotrkowska 165 you can also find a monument of an unicorn.